Keeping families together and advocating against deportations

UPDATE!!! SHAKOURE HAS BEEN RELEASED FROM DETENTION.

The Battle is not over, but after eight months of incarceration, Shakoure has been placed in "Alternative to Detention" status and released from ICE detention. He will still be under supervision by ICE, and we will continue to fight until the Department of Homeland Security acknowledges his U. S. citizenship. But for today we celebrate this victory!

Friends, we invite you to join the #FreeThemAll effort for Pascal Shakoure Charpentier and invite you to sign this letter to support his liberation. 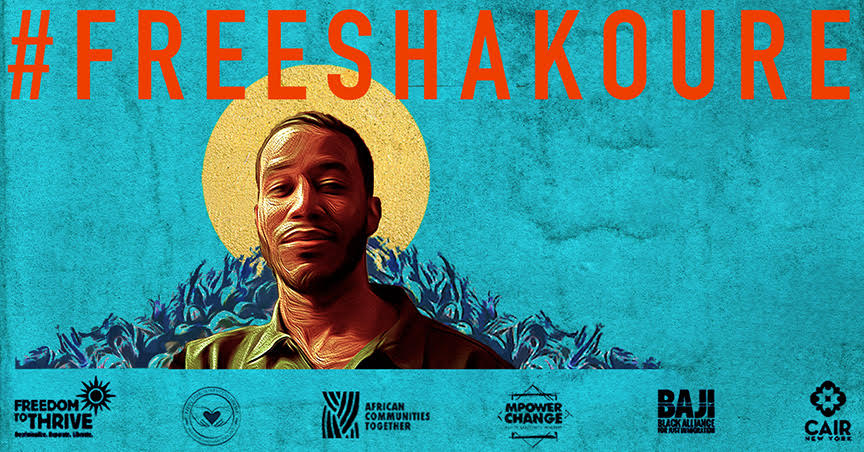 Shakoure is a Black Muslim youth mentor, business owner, friend, son, and brother from Queens who has been in ICE detention since July despite being a U.S. citizen. The Department of Homeland Security (DHS) is currently willfully withholding from the court vital documents about Shakoure's U.S. citizenship that could set him free. More details about his case are included in the letter below.


Please join MPower Change, New Sanctuary Coalition, Freedom to Thrive, BAJI, and many more by signing this letter of support. We will send this letter directly to Governor Cuomo to show the overwhelming community support for Shakoure. You can add your organization’s name to the letter here. The current deadline for signing the letter is Monday, December 14th.

A pardon from Gov. Cuomo could end all court proceedings and bring Shakoure home for the holidays. With your support, we can put enough pressure on the governor to gain Shakoure’s freedom.
•
December 14, 2020


We, the undersigned, are a broad coalition of human rights organizations, faith leaders, advocacy groups, and other people of conscience writing to respectfully request that you utilize your gubernatorial powers to immediately issue a pardon for Pascal “Shakoure” Charpentier.  Shakoure’s story exemplifies the deep injustice within our criminal and immigrant justice systems, and the level of cruelty with which ICE operates. Despite the injustice he endures, Shakoure continues to move through the world with a heart full of love and compassion. As the COVID-19 pandemic rages on, Shakoure and all of our incarcerated community members find themselves at immense risk. Their lives are not disposable; we implore you to do the right thing—pardon Shakoure and grant clemency now.


Shakoure, born on a U.S. Air Force base in Germany during the Vietnam war to U.S. Citizens Marlene Deetjen and Sgt. Edouard Charpentier, was targeted by ICE on July 6th, 2020. Even though ICE declared him a U.S. citizen on November 12, 2014, he is now subject to deportation to a country he’s never even visited. DHS prosecutors allege that he is not a citizen and are willfully withholding evidence that confirms Shakoure’s citizenship in a cruel and misguided attempt to deport him. Shakoure’s arrest on July 6th was triggered by Pres. Trump’s Enhancing Public Safety executive order, and on the basis of a 30-year-old unjust felony conviction for which he served years in prison. Shakoure currently faces deportation due to a combination of over-policing, broken immigration laws, and the legacy of anti-Black racism that permeates our judicial system.


A New York resident from the time he was two months old, Shakoure was raised in Queens by his mother, Marlene, who worked tirelessly to provide for her children. At 17 years old, Shakoure was caught joyriding in a car he borrowed from a friend. This was compounded when he was arrested later that summer in connection to the heinous murder of Brian Watkins and forced to make a false confession by the same detective who, a year earlier, got false confessions from the since-exonerated Central Park Five. Shakoure spent 24.5 years during his incarceration atoning in the only way possible, by undergoing deep reflection and participating in a thorough rehabilitation.


Upon his release in 2015, Shakoure had successfully completed his GED, earned two bachelor’s degrees as well as a master’s degree from New York Theological Seminary. He then launched a successful multimedia company and founded a non-profit organization, From Bars II Beyond, to work with at-risk kids like himself and teach them marketable skills. Shakoure is now a business owner and youth mentor who continues to show up for his community. His community loves him and wants him back.


All the while, he has also been focusing on his family which has grown to include his partner,  and his two beloved step-children. His partner is a nurse, working tirelessly to care for COVID patients. We can’t imagine how heartbreaking it could be for her to sacrifice so much in our national fight against this pandemic, and also have to go through the worst of our immigration system. No family should have to fight this fight.


Shakoure has been a model citizen, a credit to his family and a pillar of his community. It is obvious based on his conviction alone that the standard for justice in this country is unevenly applied. And after all Pascal “Shakoure” Charpentier has done to pay his debt to society, DHS plans to deport him to Haiti. He was not born there. He has never lived there. Shakoure calls Queens, NY home.


Governor Cuomo, you have the power to stop Shakoure’s double punishment and end this nightmare. Free Shakoure so he can come back to his family and community before the holidays. We urge you to take immediate action and pardon Pascal “Shakoure” Charpentier.