Keeping families together and advocating against deportations 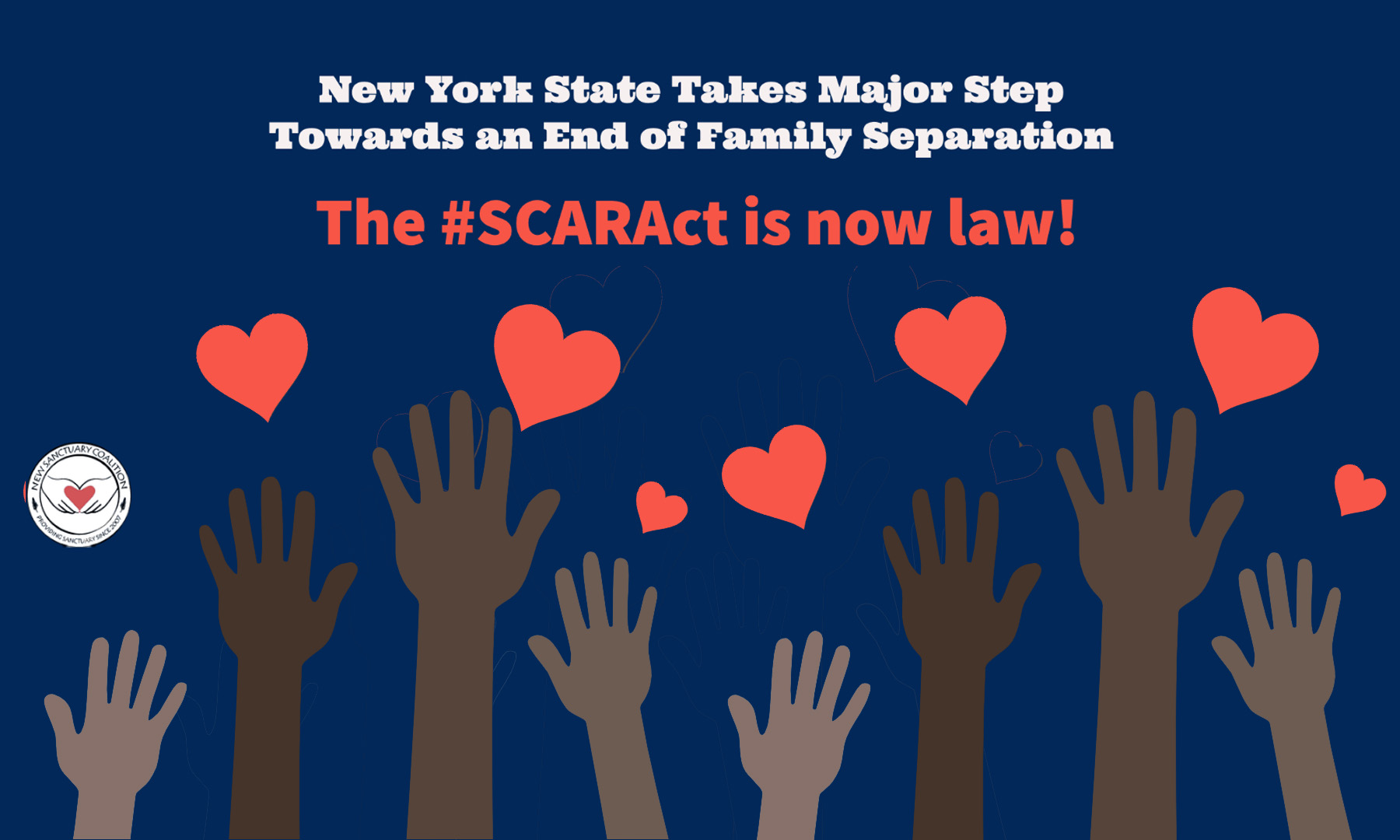 Thank you to all of our community members who showed up to fight for the Scar Act! As always, we are filled with gratitude.

Almost two years ago in response to the Trump Administration's "Zero Tolerance Policy" that marked the tragic beginning of ongoing immigrant family separations in this country under that administration, Governor Cuomo has signed S222-C (Benjamin)/ A1436-C (Epstein). Based on the Separation of Families Accountability Response Act, known as the “SCAR” Act, this bill was overwhelmingly passed in both houses as a response to the Trump administration’s policy of cruelly separating refugee children and parents at the border and sending the children into the nation’s foster care system — including in NYS. \

“When Trump’s federal government sent separated children to our state and my district, I knew we had to act, and so we introduced the SCAR Act. This new version of this bill, which will ensure that separated children are not forgotten or lost, passed both houses of the legislature this year, and is the result of the work of many faith and community leaders who understand the moral duty of loving your vulnerable neighbor in need and not inflicting harm on them. Thank you Governor Cuomo, for signing it into law,” said bill sponsor Senator Brian A. Benjamin.

“Donald Trump put immigrants in the crosshairs starting on day one of his campaign and as New Yorkers, we fought back with every tool we had.  We won a major victory in that fight with the SCAR Act becoming law. The bill creates new levels of transparency while maintaining client safety so New York’s foster care system can never be taken advantage of by a maniacal federal administration that wants to separate children from their families. Thank you to the dedicated advocates who never backed down from the challenges of this campaign and to Governor Cuomo for recognizing the value of this bill. When we fight, we win!” said Assemblymember Harvey Epstein

Earlier this year faith advocates and activists sent a letter with 340 signatures to Governor Cuomo urging him to sign this important legislation, which includes the spirit of the original SCAR act by requiring that New York social service and foster care agencies with federal contracts who provide custody for unaccompanied or separated children must share aggregate data about increases or decreases in the numbers of foster care children in their care to the NY State Office of Children and Family Services (OCFS). These numbers give advocates and policymakers basic information they need to know if there is a rise in unaccompanied and separated children so the federal immigration policy does not continue to operate in the dark. Edward Hayes, President and CEO of the Cayuga Centers, one of the state’s largest foster care providers, said at the SCAR Act coalition’s September virtual press conference that his organization supports this bill, and that it is crafted in a way that encourages transparency without jeopardizing important federal contracts that allow his organization to continue their work.

“In 2018, when New York faith leaders woke up and saw children as young as nine months old forcibly taken from their parents by government officials at the US-Mexico border and transported to social service agencies just blocks from our houses of worship, we wondered how this atrocity could be happening in our backyard,” said The Rev. Dr. Chloe Breyer, Executive Director of the Interfaith Center of New York (ICNY). “The SCAR (Separated Children Accountability Response Act) was our collective effort to shine a light on opaque federal contracting practices that shielded an inhumane policy of family-separation from legal scrutiny and moral accountability in NYS.  ICNY commends Governor Cuomo for signing this bill into law and hope it will be replicated in other states.”

“The passing of the SCAR Act is a powerful example of how organizers, spiritual leaders, directly affected community members, and elected officials can work together in fierce faith, responding to horrific, dehumanizing policies with hope-fueled commitment,” said The Reverend Micah Bucey, Multi-Faith Coordinator for New Sanctuary Coalition. “The SCAR Act’s demands for accountability and transparency should be the bare minimum in every state across this country and we hope that this is just the beginning of a true repentance for the deeply racist and inhumane immigration systems that have ripped families apart, ripped lives apart, and stained this country’s soul for far too long.”

“The New York State Council of Churches thanks Governor Cuomo for signing the SCAR Act. The world was truly horrified by the Trump Administration separating immigrant children from their parents and then, in many cases, managing to lose track of these parents making it very difficult to arrange reunification. The trauma experienced by children being separated from their parents is truly immense, cruel, and unbecoming of a civilized society” said The Reverend Peter Cook, Executive Director, New York State Council of Churches. “The SCAR Act will be an important tool in forcing transparency which can serve as a deterrent to the government breaking up families in the first place.”

“For nearly 120 years, the New York Junior League has been fiercely committed to safeguarding the well-being of our city’s children,” said New York Junior League President Dayna Barlow Cassidy. “We support the SCAR Act because it requires more consistent reporting about the separated, immigrant children in the custody of the state’s foster care agencies. As a community of advocates, policy makers, and service providers, we have a sacred responsibility to these children, and with more reliable information, we can better protect them.”

“When we heard that the Trump administration was kidnapping children and tearing families apart, and that many of the children were right here in our communities, we knew we had to fight back. Activists, faith leaders, community members, and legislators gathered in Judson Memorial Church and began the work that is now the SCAR Act,” said Meryl Ranzer, Campaign and Media Coordinator for New Sanctuary Coalition. “This law is important, no matter who the president is, because ICE and CBP won’t stop until we stop them. The SCAR Act shines a light on what they try to do in the shadows.”